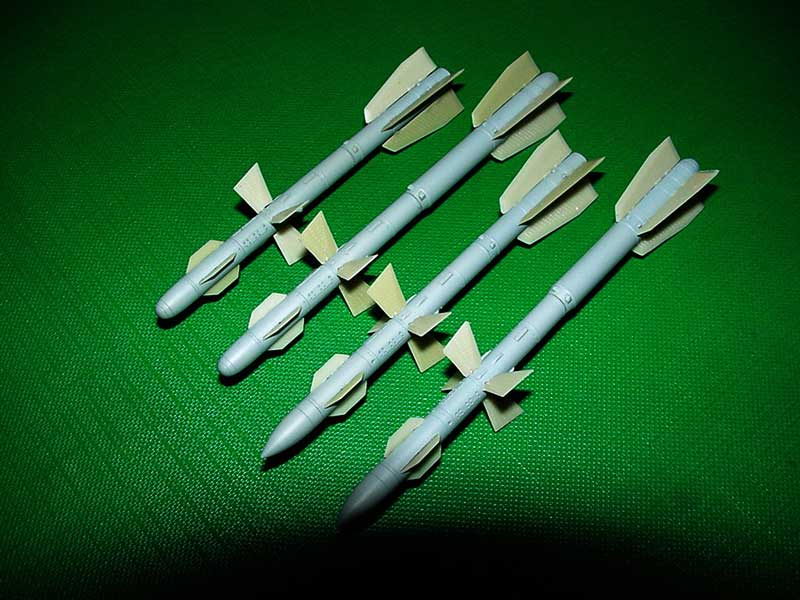 At last , I got hold on these sets – the first in aviation series of Miniarm, a Russian (but Estonian based) resin company known by its beautiful conversion and correction sets for armor in 1:35 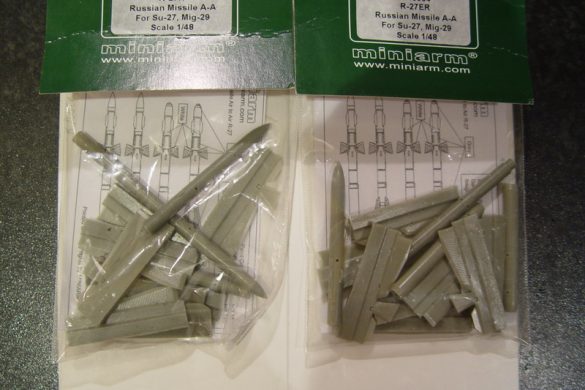 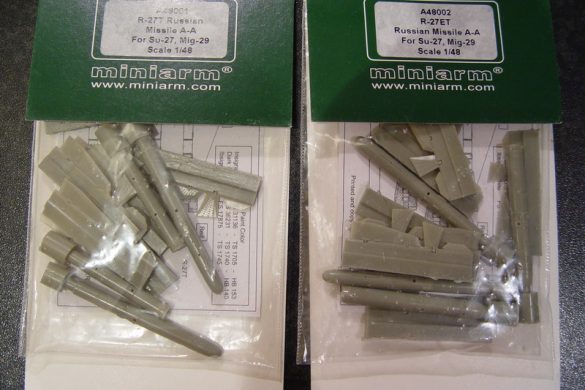 Well, what do we get in these sets?
Each of these 4 sets consists of 2 missiles:
A48001 – R-27T
А48002 – R-27ET
А48003 – R-27R
А48004 – R-27ER
Those who would like to find our more about the history of creation of these missiles, their designation and characteristics may find it usefull to read monography of Viktor Markovsky and Konstantin Petrov in M-Hobby magazine as well as Airwar.ru

The quality of resin and moldind is outstanding. Each missile consists of two parts – front and rear, and the fins assembly: wings, stabilisers, rudders. There are fine details and rivets on the wings and rudders as well as nice details and engraved “panel” lines on the missiles themself. 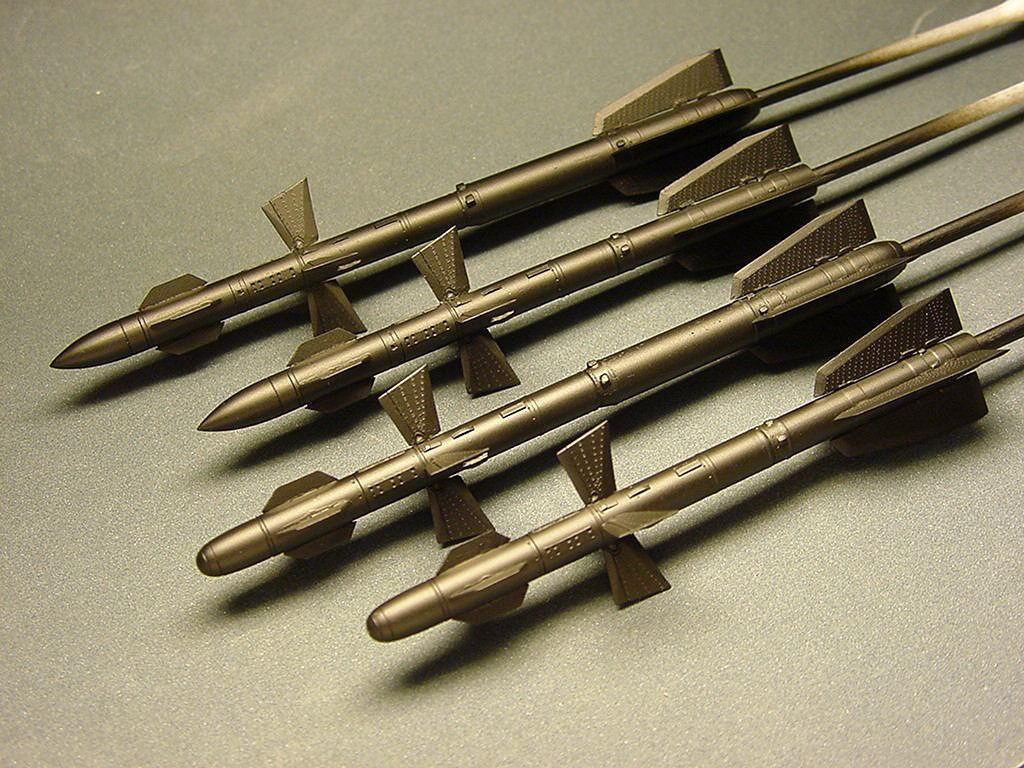 Comparison with the real stuff and missiles from Academy kit

As you can see, the Miniarm’s R-27R is almost ideally accurate representation of the real stuff in 1:48 scale. I am not showing the comparisation of the others sets by Miniarm for the sake of saving my time, but trust me, the as accurate as R-27R

All the details are molded together with supporting sprues, so you have to detach (to saw off) them before assembling.

Here I faced a very interesting issue which I would like to tell you about. Wishing to check whether a “complete newbie” can assemble a set without assembling manual (yes, they are absent from the sets, but I was told by Miniarm that they will try to include them. Anyway herebelow are my tips..) I decided to make a “fool-test”: I gave a task to assemble the missile to a friend of mine who is absolute dumb in modelling.

The man diligently detached the details from sprues and glued both parts of the missile together. When I saw the result I was shocked! He did it wrong! My tester sawed the details off in places shown by red arrows and glue both parts shown by green arrows together. When I asked him why he did it like that, he replied – because the other side (black arrow) is empty inside and since this is a missile, he thought, there should be a hole for the rocket engine! Well done, mate! =)

In fact, both parts have to be joined in a different way. First, you should saw them off in places shown by the blue arrows. See the picture on the right Then the part (1) should be inserted into the part (2) as shown by black arrow. 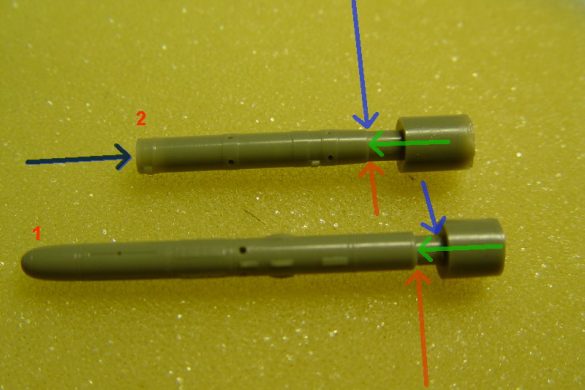 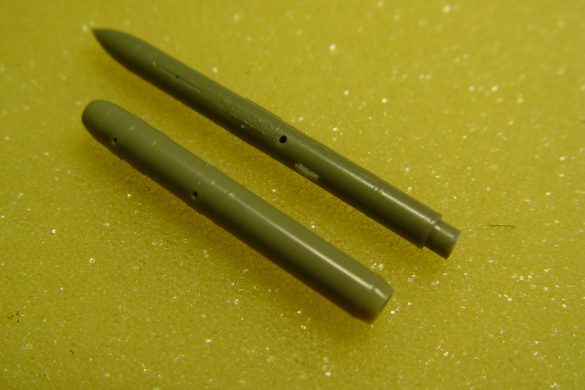 Another difficulty is that both halves must be alligned properly in order to have the fins assembly right. Since both parts freely turn when joined (hence easy to make a mistake) you should revolve them to align the places for fins on both parts (I would recomend to use a pencil to draw a line on both parts and then when both parts are connected simply to join the ends of these lines together to avoid troubles in aligning). Of course, it would have been better if Miniarm had made something like a slot making it easier to join and align both parts. I hope that in future releases Miniarm will implement this idea.

There are no decals in the sets. 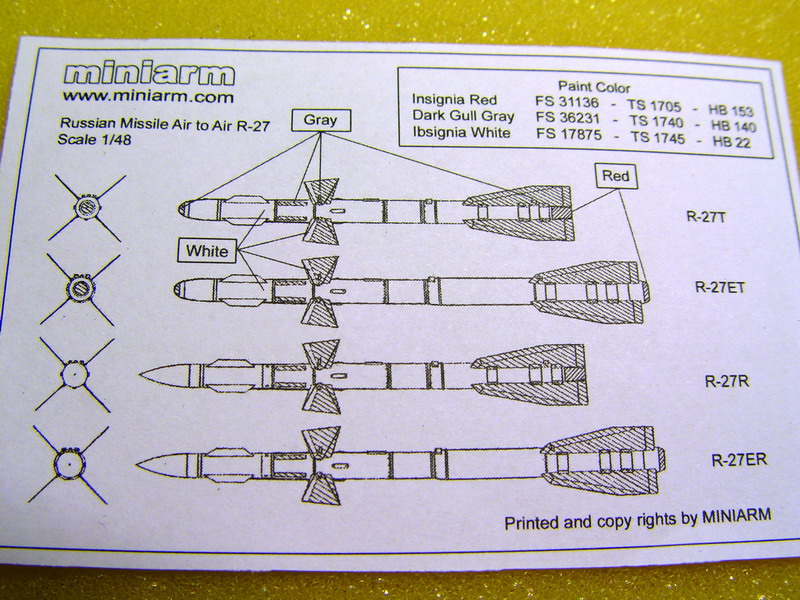 There is a small painting guide in the sets with references to Federal Standard and Tamiya spray paints.

The low price (up to 15$), excellent accuracy and high level of details – these are the main pluses of the missiles from Miniarm which override minor minuses with assembling I mentioned. Of course it would be good if Miniarm noted this remarks and, in addition, release these missiles together with launcers which are inaccurate in both (Su-27 and MiG-29) Academy kits. For example, Kazan’s R-27 set does include these launchers, although for a dearer price (40$).

In any case, I would strongly recommend these sets from Miniarm to anyone interested in building Su-27 and/or MiG-29 in 1/48 scale.

Thank you to Miniarm for the review samples